It sounds simple enough, right? But, the reality is that it is much harder to quantify and elusive to truly measure.

There are several situations that can skew these results, and this metric is often used to indirectly measure other factors in underlying video technology, which can lead to inaccurate conclusions.

What Video Startup Time actually is

Here at Mux, we refer to this metric as Video Startup Time, while others may call it “Video Start Time” or “Join Time”.

Whatever you prefer to call it, we define it as:

“The time from when the viewer intended the video to play, to when the first frame of the video is displayed”

Breaking down this definition, a viewer’s intent to watch a video can begin when they click that play button, or when autoplay begins once the page has loaded. However, the time it takes for the page itself to load can also be part of a viewer’s startup experience.

In the case where the viewer clicks on a link to the video and expects the video to begin playing automatically after the video page loads, they showed their intent to watch with that first click.

To solve this issue, we have split up our metrics into Video Startup Time and Aggregate Startup Time.

Our Video Startup Time covers the video itself, from “play” to “playing”. The pink parts of the diagram below represent when the viewer is waiting.

So while Aggregate Startup Time paints a more comprehensive picture of how long a video takes to start playing, Video Startup Time is following just the request for video data and when the video starts to play.

One of our engineers likes to describe these two realms of video and webpage as “Videoland” and “Javascriptland”.

Video Startup Time is still not a simple metric to measure though. An immediate rebuffering issue after the first frame is technically outside of Video Startup Time, but would definitely be interpreted by the viewer as a slow startup time. On top of that, pre-roll adverts can also skew this metric, and cause problems for accurate measurement.

Despite this, Video Startup Time is certainly crucial to analytics and stands as one of the four pillars of video performance.

The most obvious example of its significance is lost viewers. There is a definite correlation between a viewer’s interest in the video, and how long they are willing to put up with loading issues before they simply give up and leave.

Akamai reports that “viewers start to abandon a video if it takes more than 2 seconds to startup,” possibly waiting as little as “200 to 400 Milliseconds”. On top of that, a further “1 second increase in delay [in video startup time] increases the abandonment rate by 5.8%” for each successive second.”

The good news is that if the content is longer or considered more “worthwhile” by the viewer, they will wait around for it to load. Viewers for a lengthy video or a popular show are typically more willing to wait through a longer startup time.

Mobile viewers are another demographic who are more forgiving of long video startup times, because they usually have lower expectations for how fast a video will load compared to if they were on another device. 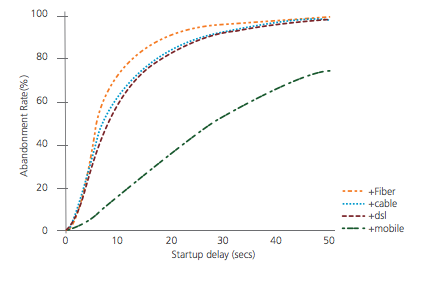 It seems like a simple enough metric to follow: you hit play, and the video loads. Simples! Well no, there are several factors that can ruin accurate Video Startup Time results.

Often, a host will pre-load video before the viewer clicks play when a video is very likely to be watched. Examples might be a video in a news article or a product demo on a homepage.

Naturally, the startup time for a video that has already been loading is negligible because…well, it’s already loaded. This can create problems if pre-loaded video is used when measuring a Content Delivery Network’s load times, as your data on how long the video took to load will be deceivingly low and not accurately reflect your load times.

A more telling issue is the one of intent, because in the mind of the viewer, intent could start before they have even clicked play. While most viewers have a reasonable expectation for how long it takes to get to their video and wait for it to load, this time is still part of their wait for the video to start. A long page load time can cause a similar drop in viewership, before the viewer has even gotten the chance to click play and influence the Video Startup Time metric.

Ads add to the confusion

This question should not be taken lightly. Facebook found itself in hot water with its large marketing user base when it was revealed that Facebook’s video metrics were inadvertently inflated.

Previously, Facebook had only recorded data on viewership after a viewer had watched the video for a minimum of 3 seconds. This cut out the significant number of viewers who dropped from the video before 3 seconds had passed.

This skewed percentages and inflated results, as people who had abandoned the video, due to elements like a poor Video Startup Time, were not counted at all.
While Facebook stated the error was unintentional and ultimately it was resolved, it is a prime example of how crucial measuring a video metric accurately can be for a multi-billion dollar marketing industry.

So how does Mux’s video analytics technology help you to get around the problems?

While examining Video Startup Time, you can compare the median result and the 95th percentile. You can also view detailed tracking of your Page Load and Player Startup Time, or for a more comprehensive overview of the viewer experience, there is of course our Aggregate Startup Time metric.

Finally, you can see the percentage of viewers who exited the video before it even started to play, allowing you to see in real time how Video Startup Time is affecting your viewer experience.

In the future we’ll have more detailed analyses of analytics, and you can stay up to date by following us on Twitter and Facebook.

Next in this series, we will be looking at Maintaining Video Quality with metrics

If you’d like a demonstration of Mux’s tools, feel free to reach out to us for a Demo!