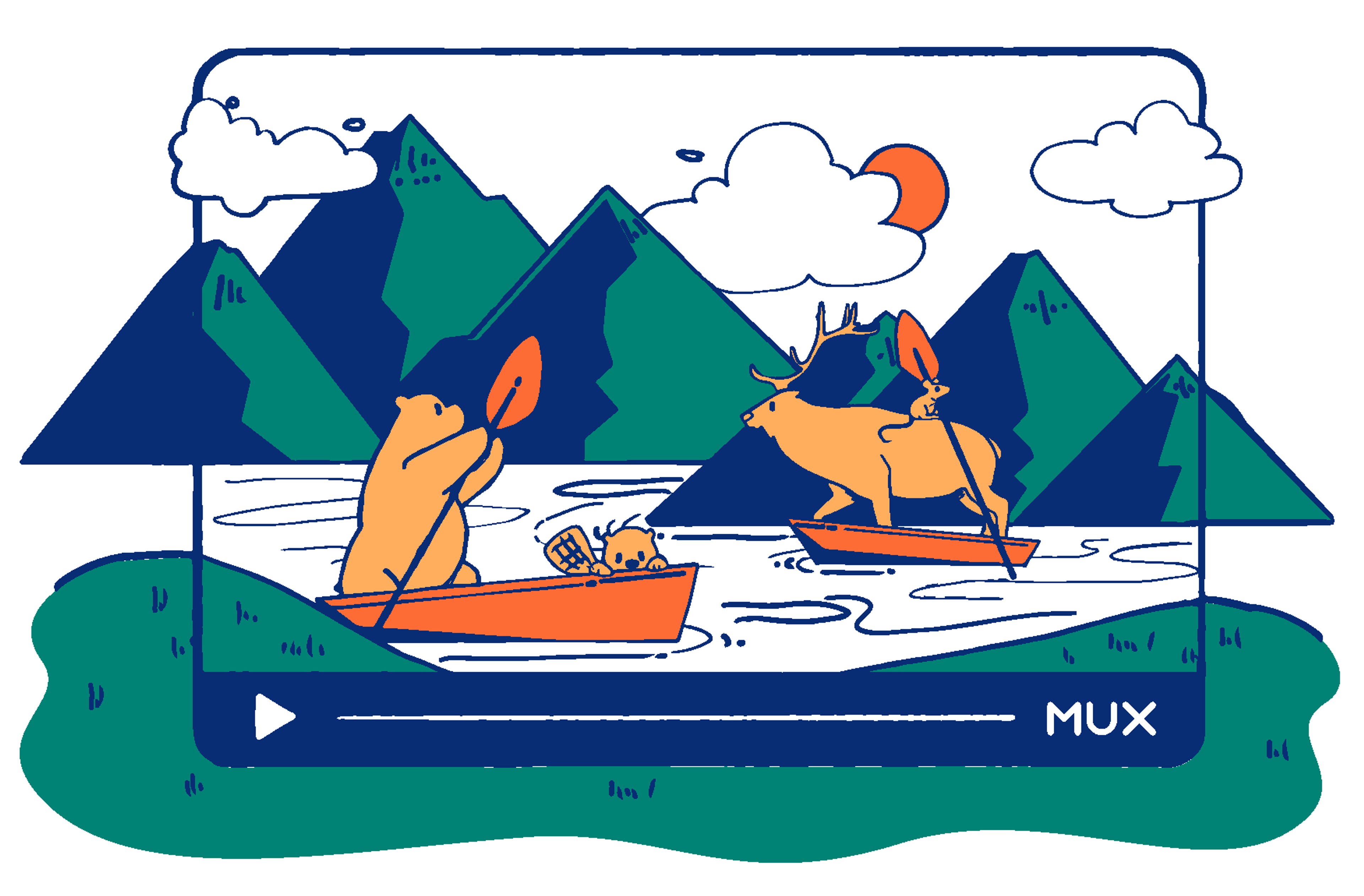 Things at Mux became complicated this year when we learned that CascadiaJS would be holding their 10-year anniversary conference at the beautiful Sunriver Resort in Oregon. Yes, it was really difficult. We had some super tough decisions to make.

If the sarcasm doesn’t translate, let me put it this way: we were immediately in to sponsor and support the JavaScript community in the PNW.

With 400 water bottles and our video guestbook in tow, four of us journeyed to the resort to spend time with the community and share more about what we’ve been up to at Mux.

As the sun set, our camera, monitor, microphone, and ring light were all rising, powering the Mux video guestbook at the evening social events.

With over 100 submissions from both virtual and IRL attendees, the guestbook was a huge hit.

It provided folks with a way to commemorate their time at the conference and gave us the opportunity to show off some of how Mux works behind the scenes.

Read on for more from the rest of the crew:

If you only participate in the Web Dev community by following along on Twitter, you’re missing out. You might think the only conversations that ever happen are all about raving over the latest JavaScript hotness every two months, or what the One True Way is to make a website and how superior it is to The Other Way.

Thank goodness for CascadiaJS reminding me that the Web Dev community is so much more than that.

It started with some pretty great talks. Chris Coyier’s infectious enthusiasm reminded me that The Web is Good Now and we have so much to be excited about as a community!

A community that can and should grow, as Brittany Joiner laid out in “Making tech careers accessible for everyone.” And some of the sharpest minds in tech, like Brooklyn Zelenka and Shawn Wang and Mikeal Rogers, are pushing to make sure that the web will continue improving in deep and interesting ways. The present and future of Web Dev are bright.

But CascadiaJS was more than just amazing talks. We sat around breakfast and lunch tables talking shop and learning about what’s cool in Web Dev. We spent time outdoors together on CascadiaJS’s amazing activity track. (Street cycling in Chicago did not prepare me for the Bike to Benham Falls. What our expedition leader described as “gently rolling singletrack'' felt to me like conquering mountains. What an amazing Oregon experience with some amazing folks!)

And at the end of the day, folks gathered around our video guestbook. Cheering and waving. Being together and having fun. All from a li’l NextJS app with some Mux tossed in. And as the evening wound down, s’mores around the campfire.

Sometimes I forget that this is what Web Dev is all about. Good people making neat things on the web.

It felt so good to be back at a real-life in-person conference. I forgot how energizing it is to be around a bunch of developers, talk shop, and hear what people are building.

One phenomenon kept happening to me where I would talk to someone for a good 10 to 15 minutes, think they look vaguely familiar, read their name tag, and not really know if I’ve seen them before…only to realize later that night scrolling through Twitter on my phone that some of the people I was talking to were actually people I’ve followed on Twitter for years.

I am now starting a campaign to make sure everyone at the conference next year wears a shirt with their Twitter profile picture smack dab in the middle of it.

Special shout outs for some of my favorite talks:

Talking to folks at similar conferences 3 years ago, the big themes I remember were jamstack topics: things like faster builds and incremental static regenerations and finding ways to make static sites more dynamic.

This year, I heard a lot of folks talking about new (non-React) frameworks and new JavaScript runtimes (bun.sh, deno).

I’ve attended conferences in the past, but this was my first time attending as a corporate representative, and it was interesting to experience things from the "other side." I learned a lot about myself and how I interact with people, both my team and others in the tech field.

I also realized I’m able to contribute to these events in a new way. It's classic imposter syndrome stuff: sticking with being a consumer of content and advice is tempting, but I discovered I'm at the point where I can start sharing some of what I’ve learned with other people.

Finally, I appreciated that some of the talks were deeply technical about new frameworks or languages, and others focused on the social and day-to-day aspects of being in this field.

One of my favorite talks detailed how to expand access to tech careers, a lot of which echoed my experiences — including items that made the transition easier, as well as more difficult. Overall, I appreciated the structure of the talks and other conference activities!

CascadiaJS was the only conference we’d been to that ended with s’mores around the campfire, and we wouldn’t have had it any other way. Maybe we’ll be back for a 2024 visit!

by Matthew McClure
We're doing the conference thing: The Mux Informational is coming to a screen near you for free on May 24. Here's why we're doing it, and why you should join.
06/30/2022

by Jared and Garrett
On May 24th of this year, we held our first customer conference — The Mux Informational, or TMI. Many of those who joined us online have asked how we produced and streamed such an amazing conference. ...
03/20/2020