Rebuffering: The Most Frustrating and Frequent Problem for Video Consumers

Rebuffering: The Most Frustrating and Frequent Problem for Video Consumers

In March 2017 we conducted a survey of 1,035 US consumers about their video streaming experience when using a streaming service with their TV. Participants came from all 50 States of the USA and ranged between the ages of 18-44.

In this survey we wanted to explore how consumers felt the four core elements of video: playback failures, buffering times, picture quality, and how quickly videos loaded.

In this article we are going to offer analysis on some of the results we received. You can access the complete survey here.

As part of our survey we asked users to tell us what was the most frustrating problem they had with video streaming on their TVs, and which problems they felt were the most common.

“Which of the following streaming video problems is the most frustrating for you when it occurs?” 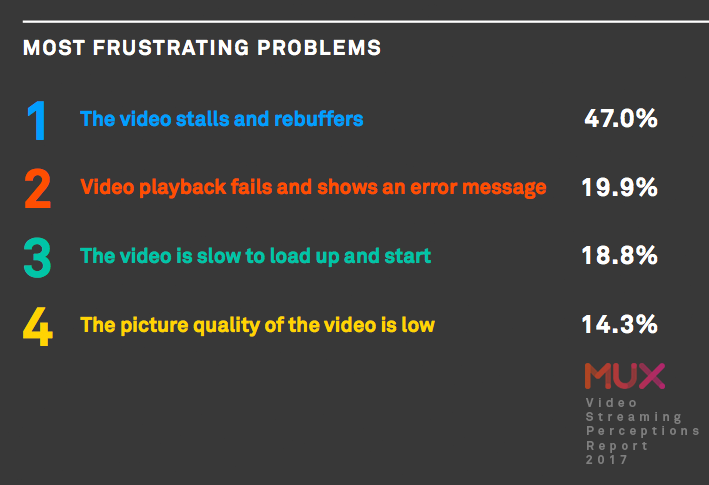 Users said the most frustrating problem was when the video stalled or had to rebuffer (47%). This is not surprising as buffering can cause up to a 40% drop in viewers.

The second most frustrating issue was video playback failure (19.9%), but this was very closely followed by the video taking a long time to load (18.8%), with a difference of just 1.1%. 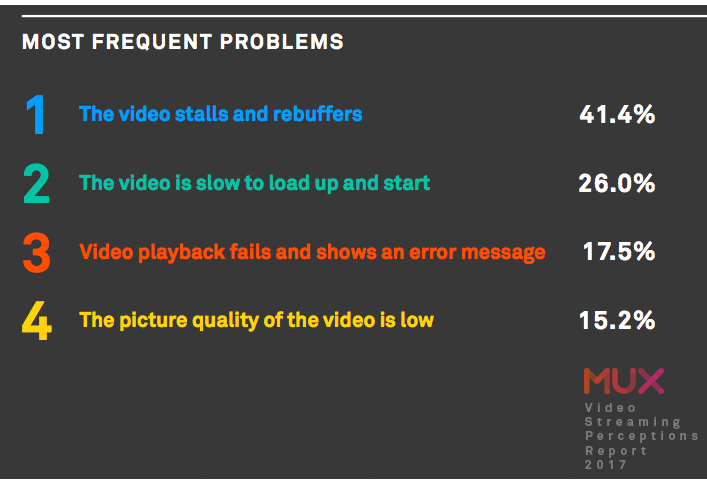 An interesting difference though, is that users said slow video load times (26%) were more frequent than playback failures or errors (17.5%). So while playback failures may be more frustrating for users, they don’t think they are happening as frequently as slow video start times.

Another valuable insight is that video picture quality is the least frustrating and least frequent problem for users, who are streaming video to their television sets. This pairs well with our understanding of video quality, because while it is still important, most viewers are willing to accept lower quality video as long as the playback and audio quality remains good. That being said, about ~15% of users still considered it their most frustrating (14.3%) and most frequent problem (15.2%).

Reliability and Quality is key

In a following question, users were asked if they Strongly Agreed, Agreed, Disagreed or Strongly Disagreed with the following statement:

“When considering streaming video services, the reliability and quality of the video streaming experience is very important to me”

Their responses show that 65.5% Strongly Agree that reliability and quality are very important to the video streaming experience they are having through their TV sets, with 30% saying they Agree with the statement.

This means a monumental 95.5% of users said that the reliability and quality of their video experience was very important to them.

This shows that users want high quality video streamed through their TVs, but they are frustrated by rebuffering, slow video start times and playback failures. Clearly there is still room for improvement.

If you would try Mux’s powerful analytics that can help you improve your video delivery pipeline, you can sign up for a free trial.