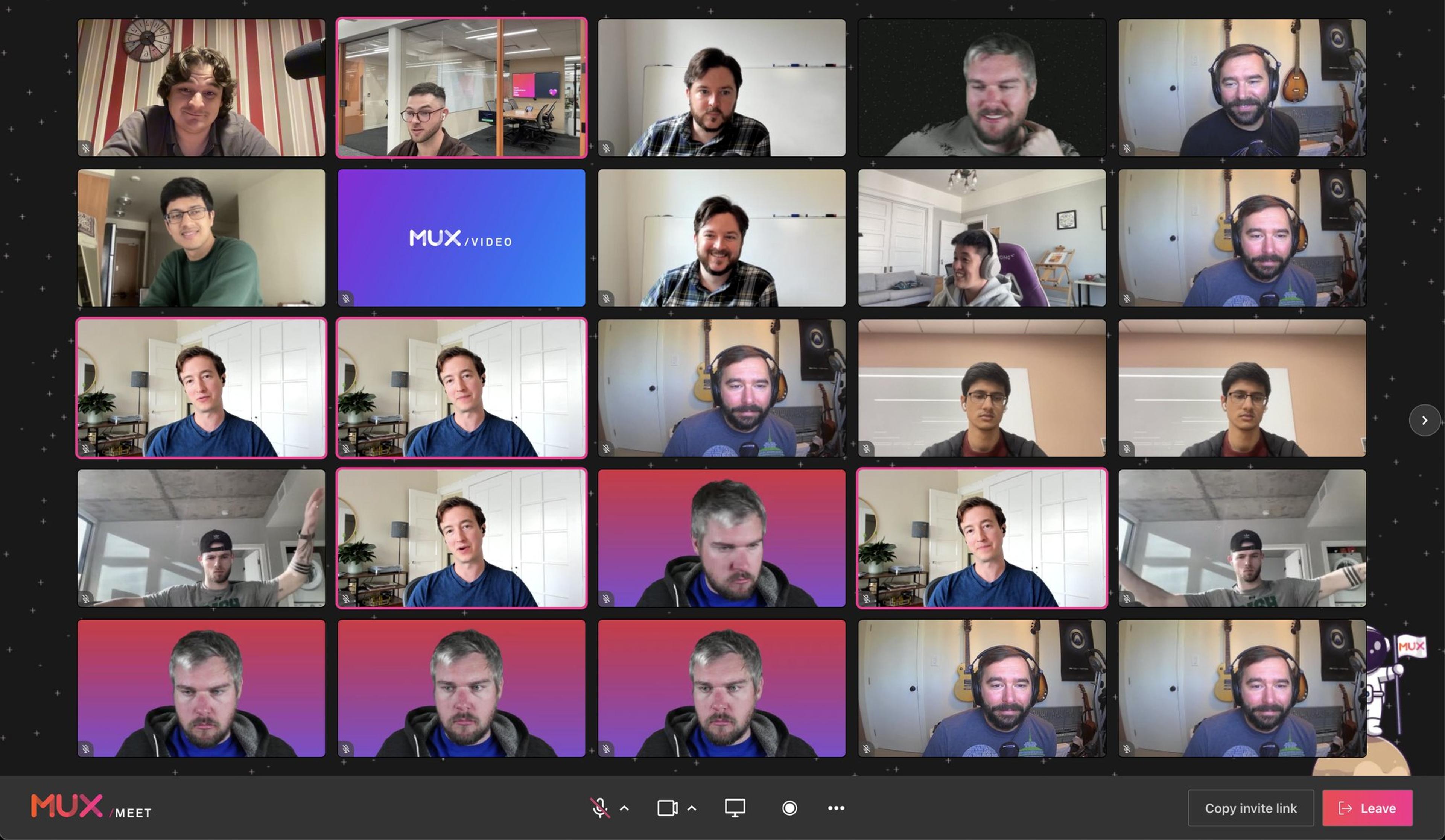 Developing real-time video without all the meetings

Developing real-time video without all the meetings

Working on Mux’s new Real-Time Video product, I quickly discovered that testing real-time video systems can be really challenging. You can get by at first with opening your web application in multiple tabs in order to simulate different participants. This can go a long way, but it also has some big limitations:

Another approach is to rope your team into helping with testing. We built and open-sourced Mux Meet, which we used for our daily stand ups and ad-hoc meetings to test Real-Time Video in real-world scenarios. Mux Meet helped tremendously and was an invaluable tool, but it has some limitations too: we only have stand ups once a day, so there can be a roughly 23-hour delay between discovering a bug and the next opportunity to test a fix. You could try to wrangle folks together for impromptu meetings, but scheduling can be tough, and it takes time out of people’s day when they’ve got their own bugs to fix.

So the question is: how can we get closer to that real-world scenario of testing with multiple (different) people without the pesky meeting part?

In searching around for solutions, I stumbled upon HTMLMediaElement.captureStream.

That last sentence piqued my interest, as it seems to mean that I’d be able to essentially pipe in any <video> element as the camera/microphone, which would open the door to a whole range of possibilities. I have been bitten before by misinterpreting documentation and getting my hopes up, so I sat down on a Friday afternoon and decided to see if it was indeed that simple.

Turns out this function is exactly what it says on the tin. With less than 50 lines of code, I was able to build something that would take any HLS video and use it as the input to join a Space. This should be a generalizable solution, but we are going to use some Mux-specific components (this is the Mux blog, after all).

To start off, we’ll need a real-time SDK, a means to play arbitrary videos, and a web page to link them all together. We'll be following a roughly modified version of the Mux Spaces Web SDK Getting Started Guide for the web page and real-time SDK along with the <mux-video> web component for playing the videos.

We need a video player to play our video. Let’s create one in src/index.html.

Let's start some video playback! You can hard code a source video, but I'm going to make it a little more flexible by reading either a Mux Playback ID or arbitrary video URL from the query parameters.

Now, if you run yarn parcel src/index.html and visit http://localhost:1234/?playbackID=a4nOgmxGWg6gULfcBbAa00gXyfcwPnAFldF8RdsNyk8M, you should get a simple video player with a sample video loaded.

3. Let's finish it off by having this page join our space as a “participant” and share their video/audio.

That's it! Now, every time you open that web page and press play on the video, a new synthetic participant will join your space using the video/audio of your choosing.

If you end up using the captureStream approach, let us know! We are planning on adding SDK functionality to make it even easier and would love to hear what you're building.

Up until now, we've been running things on our machine. This helps with basic testing, but it doesn't address the network congestion issues that can (and will) arise from having all those participants publishing and receiving video locally.

This is 2022 — you'll probably trip over a Kubernetes cluster on your way to the kitchen — so let's slap a headless Chrome in a docker container so we can scale our synthetic participants.

Let's create a launch.sh as an entry point for our docker container that will start our parcel server and launch Chrome.

After putting this fake participant approach together on a Friday afternoon, I found myself using it time and time again for many different purposes.

I’ll be the first to admit that there are objectively better ways to accomplish each use case, but being able to adapt to new use cases quickly with minimal effort has made this fake participant approach one of the most powerful tools we have for testing Real-Time Video.

If you have been wanting to develop a real-time video application but are stuck on the testing, hopefully the techniques described have helped you get over that hump and you are able to build something awesome. If you are looking for a further head-start, check out the newly GA'd Mux Real-Time Video.